Training Manager Brandy Guthery arrived in Oregon to pursue her passion for dance. What she didn’t know at the time was the her dream would lead her to form a non-profit dance collective called A-WOL.

“I’ve been dancing forever,” says Brandy, “but when I took an aerial class, I was hooked.” Just as soon as she realized a new passion, she also realized that classes weren’t going to cut it.

“I like to do my own thing, to be in charge, and me and the other three founders of A-WOL felt that creating our own collective would help each of us to get what we need. For me, it was a creative outlet.” From that point on, she took more classes and honed her craft in her own way.
What she didn’t expect was the steady growth the group experienced. “Initially it was easy, it started out with just us four. We booked free gigs and just had a good time. With all the growth it of course got more challenging to manage.” A-WOL now enjoys a non-profit status and dedicated, paid employees.
“We are a collective, and we have been from the start. A collective means that each person has a responsibility outside of performing. Some help with costumes, others manage lighting, each person has a job. That’s how we wanted it.”
Now touring throughout Oregon, Washington, California, and Idaho, A-WOL plans to expand further in the near future. “We would like to grow our class offerings and ramp up our tours. Our big goal is to pay performers for rehearsal time, and the directors a fair offering for what they actually do.” 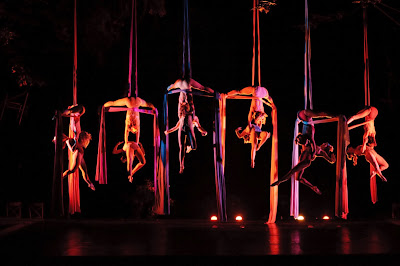 Good luck, Brandy! We can’t wait to see you perform!
To learn more about A-WOL Dance Collective, visit their website at www.awoldance.org.